For the past several months, I’ve been working on number of projects that utllize a view layout similar to Twitter for iPad. For those that haven’t seen Twitter for iPad, the app has a root view that essentially shows a vertical tab bar on the left. When content under a certain tab needs the attention of the user, a “glow” appears on the tab.

You can get the source on Github!

To help kickstart others who want to organize their app in a similar fashion, I’ve created CKSideBarController. Its API operates very similarly to UITabBarController, and its look and feel is clean: 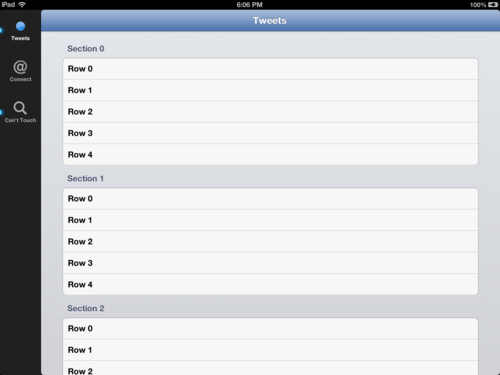 CKSideBarController is young. As in, I wrote it yesterday. Currently, there’s no way to customize the look and feel of the Controller’s view. Fortunately, the styling code is fairly easy to find (Search for “UIFont” or “UIColor” to get rolling); so definitely fork and style to match your app!

If you’ve stuck around, it means you’re interested in CKSideBarController, blemishes and all! If you’re adventurous, you can get a good idea of how to use CKSideBarController and what you can do with it by looking at the example project included in its Github repository.

The easiest way to use CKSideBarController would be CocoaPods, if I had had time to get a spec written for it NOTE: if you want to a make a Podspec for the controller, please do and let me know when it’s published!). a Podspec outstanding, you can simply clone the Github repo and copy all the files under the `Source` directory into your XCode project. CKSideBarController is written using ARC, FYI.

If you were to run the app with the above code, you’ll see an empty side bar with no content. You’ll need to give the view controller some UIViewControllers to handle!

If we re-run the app, we’d see the side items populate with images, titles, and a pleasant glowing effect. Awesome! If we want even more fine-grained control over tab selection, you can have your app delegate implement the `CKSideBarControllerDelegate` protocol. All of the methods are optional, and allow you to decide if a tab can be selected, as well as being notified when the selection actually happens (not unlike UITabBarController, for example). Be sure to set your app delegate as the side bar controller’s delegate if you want take advantage of these delegate methods.

Please use the controller and let me know what issues you find with it. Be sure to log it in Github Issues and I’ll do my best to look into it. You can also fix it yourself and submit a pull request. I’d suggest running new features by me before submitting a pull request (or do it anyway, whatever), as I try to conscience of feature creep in the controls I write.